Spread the love
An example of Dementia Fraud.
To be used in Parliamentary meeting as an example of fraud etcFrom: Dr Mark Jones FRSM
Freeman of the City of London
Parliamentary Candidate
Scottish Freemason.
MBA, PhD, Ma, PgDip :.
Fellow of the Royal Society of Medicine.All correspondence by email as I am travelling and the only way to
reach me is through email.

Please acknowledge this email and its attachments.

To HEAD of SRA & Law Society.
The following will be used as legal action against you for your failure of Duty of Care to my mother and many others. Who were robbed and more
Claim No E30LV485
Exhibits are now on website and books on Amazon.
https://www.amazon.co.uk/lawyer-Woodside-mother-Bartlett-protected-ebook/dp/B081RBQCYJ/ref=sr_1_fkmr0_1?keywords=a+lawyer+hit+my+mother+called+woodside&qid=1574964311&sr=8-1-fkmr0
also on the web site
https://corruptsolicitors.co.uk/corrupt-solicitors-chester/bartletts-solicitors-chester/
Journalist and other said it is clear my mother was murdered for her home… that Woodside hit my mother and Bartlett still can not show how 100,000 care bills became 800 or how he undervalued my mother’s home by 700,000 etc or took my mother’s money without any reason…
and we have other saying they had the same issues now sent to politicians & police who are looking into Dementia Fraud.
There is now further evidence that my mother was murdered to steal her business and home, that Woodside her lawyer hit her to change her will by force to the advantage of Mr Bartlett (backed up by Expert witness and other evidence)
That David Green knows all of the below and still works on this case.
NOW
I went to court and Bartlett’s lawyer David Green lied in front of the judge on 27/11/2019, He said he had sent me his court proceeding by email as he should do as set out by the rules of the court but in fact had not See my emails  exhibits Emails1of27112019 & Email2of27112019 (see bottom of this page)
Instead he gave it to me in the court with out any notice etc seeing I had no lawyer with me. I am not a lawyer.
(These are on the web site). Then he used this to his unfair advantage to help in a court case I was going to win.
Therefore from my N244….
I seek the court to appeal the decision of Judge Hodge in Liverpool 28/11/2019 who removed my right to have witnesses at my mother’s probate case.
I state the COP24 witnesses statements are valid & relevant to the case. I was without my lawyer on the 28/11/2019 & the court case was going to be only about pre-trial.
The claimant’s lawyer David Green said I was sent an email about this but my exhibits Emails1of27112019 & Email2of27112019 shows no such emails from them. Therefore he knowing lied & can not be a mistake as it was done to weaken my case. It can not be fair or right this to be allowed and effects my Rights to Fair trial. A transcript of the court case will show David Green’s lie to the court.
I ask for the court case to be delayed until this is sorted out. There is no rush as no payments to be resolved etc. If the case goes ahead It will be seen as corrupt as before this I was going to win and the other side wanted to settle out of court.Background of case
1 With Dr Howard’s report for the court 2019 was clear that I would win my mother’s case on probate.
2 The fact my mother also said Mr Woodside hit her and is backed up by Dr Howard’s report also helps me. There are many support exhibits & witnesses.3 Then on 27 of Nov 2019, I had a pre-trial hearing with the claimants lawyer David Green and the Judge (His Honor Judge Hodge QC). A nice judge but he Exhibit Emails1of28112019does not understand my mother was murdered and this is part of the case of chaining her wills to help criminals.
4 All was going well until the other side said I had not done witnesses statements.
5 This is not true. I am using the COP24s for statements (See Exhibit ReducedEvens &Exhibit 039) which I did in the past for my mother’s case. If the cop24 were suitable for the court of protection and judges in 2014? and with same issues, then why not in this court case.
6 Also I had sent these exhibits to everyone from the start 2018 and used them as exhibits.

7 Then the Judge said I had not sent a list of witnesses I was going to call in court, but then I found the email on my phone showing I had done this.
Then the Judge said the COP24 were not related to the case. BUT they are by such issues as:
coercion with people trying to force my mother to sell her home against her wishes instead of leaving it to me.
My mother’s neighbour, who said my mother needed help by me and lacked capacity and show the other side are lying. I also was the one who put money into my mother’s business and mother was always going to leave me her business & home and she told everyone that.
8 The other witnesses supported this and they had nothing to gain by this. Also that they saw my sister try by force the sale of my mother’s home etc (Exhibit 039).
9 In contrast, the other side says my mother had capacity when wills were done, but they gain by this, and more importantly from the point of law they are irrelevant as the Wills were not done right or use MCA2005 etc Also 1) there are medical reports that show my mother did not have mental capacity 2) the wills should reflect the money I had put into my mother’s business.
This action also remove the intent of my mother giving me my mother’s guest house which the Witnesses all support as they saw I put money, time and left pension jobs to run the guest house when my mother was ill.
All backed up by my COP24 and my witnesses.
12 The Judge said I could appeal his decision to remove my witnesses, but that take 21 days and the case starts in 7 days. He did say I could go to the court in London. A judge should of tried to make the court case fair…
14 I am putting in appeal as that is my right by law and the court case can be paused as I am the only person alive from my mother’s will & not the lawyers and the other people who tried to kill and steal from my mother. And it is clear this is being hidden by the removal of my witnesses.
15 Then on the same day at the court case, the Judge went into the cost of the court case which they increased, but I pointed out how could go up if they have removed 4 of my witnesses? The judge smiled.

15.1 I then also pointed out Bartletts cost were very high almost London rates and this too was smiled at. Bartlett is known to over charge.
16 Then I brought up the N244 I sent to the court asking for the Judge to note the many issues in the case such as 1) lawyer Woodside hitting my mother 2|) Bartlett £100,000 care bills that become 800 (from 2015 to 2019 in the court papers) when I investigated and no receipt from the lawyers after year!. 3) The fact money was taken from my mother’s account by the lawyers Bartlett etc. 4) Then in the past the lawyer buying the law firm to be the executor of the will then undervaluing my mother’s business by 700,000, and the list goes on. (see web site for other who had the same issues by these lawyers).
17 The Judge acted like this was funny. But did not send it to the CSP. The judge was told about serious wrongs with evidence but took no actions. I said my mother was murdered…and nothing from him….and this is part of the probate case.
18 What I saw was a court case engineer to give a false result by removing my key witnesses.
19 This can not be fair and must be investigated.
19.1 This is a breach of Art 6 European Convention of Human Rights (ECHR) Art 6, Right to Fair Trial.
20 The court case is not in a rush as my sister is the claimant and has died and the case is worth over million, so why the rush? Other than the claimant’s lawyer wants their hands my mother’s business.
20.1 The only bills to pay our 800 care bills according to the lawyers.
21 Therefore I request that the rights to submit witnesses statements is granted and then for this case to be heard in front of Mr Justice Snowden or someone else like him. He is the best judge we (my friends who were present ever saw).
22. Mr Justice Snowden clearly said the other side to give me documents which they still have not done. I have had not had all the files and request them before the court case starts.
A transcript should show this was said by Justice Snowden.

23. I want to Avoid the following judges and ask they are  not involved in this case. Also how well do they know anyone in this case.

5.1 For more videos of my mother see the website which was put up at the start of the year.

Barlett and Woodside then in January 2019 threatened to use legal actions to shut me up due to the website but then did nothing as the site is based on truth. In November 2019 still no actions by them after me asking them what is wrong with me saying my mother was hit by Woodside to by force change her wills and sell her business to Bartlett. 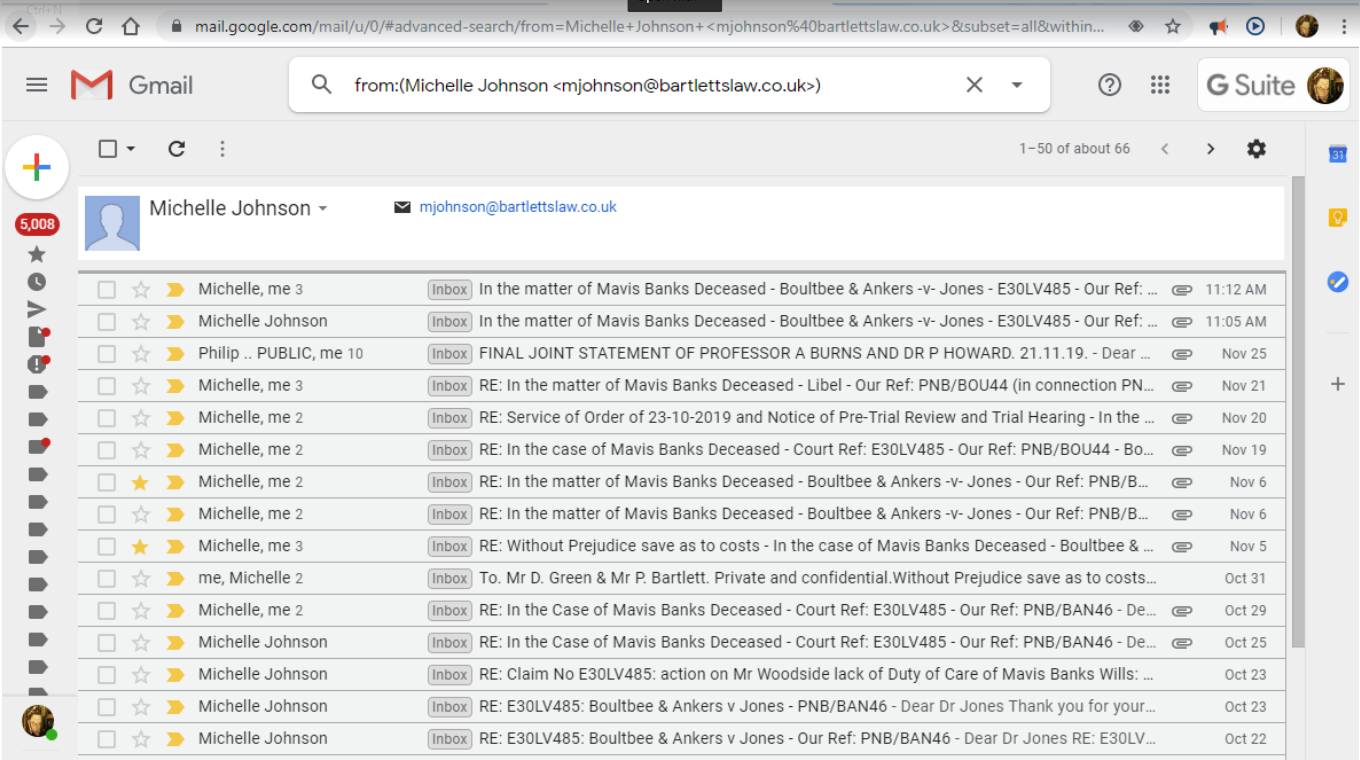