I sent this email to Christian Matheson (MP) City of Chester my local representative, now given I am reporting alleged crimes it is encumbent upon him to report this matter to the police but will he? 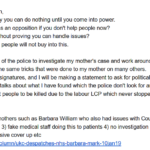 Excerpt of the email I sent to my local MP in Chester.

Dear Chris  (MP of Chester)
And Jeremy Corbyn and Stuart Lachlan,
Thank you for your email which you say you can do nothing until you come into power.
BUT, how can you be taken seriously as an opposition if you don’t help people now?
Do you want to be voted into power without proving you can handle issues?
I canvas a lot and talk to many and the people will not buy into this.
I want your help for me to get the head of the police to investigate my mother’s case and work around the corruption.
This is important as other crimes use the same tricks that were done to my mother on many others.
My mother’s petition is now over 1909 signatures, and I will be making a statement to ask for political changes by a PR company.
I already been to parliament and done talks about what I have found which the police don’t look for and it is clear this should be done unless you are hiding the fact you want people to be killed due to the labour LCP which never stopped in 2014 and is clearly still used on all ages.
I have collected others cases like my mothers such as Barbara William who also had issues with Countess of Chester hospital such as 1) murder of loved one 2) stealing organs 3) fake medical staff doing this to patients 4) no investigation 5) regulators failing in their jobs 6) good cop stopped investigating 7) massive cover up etc
listen here https://soundcloud.com/ukcolumn/ukc-despatches-nhs-barbara-mark-10jan19
Also, Barbara William had the same corrupt coroner who in my case also tried to shut me up and this is on the inquest tape, including Dr Bland (struck off in 2018 as pedo and part of a network in Chester) lied with Dr Nickolas who should not be allowed to practice.
AND I want help to get this inquest tape as my mother died under DOLS so this is an article 2 inquest and therefore these tapes should be public. And this protects people.
With all this, it becomes easy to see how then 15 babies  (a lot more!) could of be murder in the same hospital (2015-2016) with this corruption.
We can also show the SRA failed me when I showed a video to them where my mother says she is hit by a lawyer Mr Woodside to force her to sell her home, take over the Wills, undervalue her home etc
It also looks like Mr W help Mr Barlett (lawyer) who did this to many other elderly ladies (on tape).
The  SRA fail to do anything about this and in fact, looked like the three people there helped in the corruption.
Even when the said law firm Bartlett did this to others (on tape) and there are two damming web site about them, and then they threaten me about this and then did nothing as it was all true.  The SRA do nothing which is why they exist.
https://corruptsolicitors.co.uk
https://corruptsolicitors.co.uk/corrupt-solicitors-chester/bartletts-solicitors-chester/
And not only did the CQC (cost millions), SRA (cost millions) fail but also the POLICE
Same police detective MA’ Michael Ankles listed in Exhibit 040 in the past was found doing the following
1) trying to force my mother to sell her home, 2) stealing from her (Exhibit 121) 3) hurting my mother and wanted to shut me up) who when i was trying to reopen my mother case after her inquest.
He then went to NZ when I was about to try and reopen my mother’s inquest and commented on my daughter photos in NZ, and all see this as threat (Ex-police, Brian Gerrish, etc.), and he should not have done this. He is a police detective involved in my mother’s murder and should have known not to do this and should be struck off and he knew Dr Bland , Mr W, Mr B and the coroner well (more coming soon).
Also the hospital and nursing home involved in my mother’s murder and others was trying to run privatisation services which they trying to hide, and this must be investigated. Something you as the labour party should do but don’t!
This is urgent so please contact us as soon as possible
Otherwise, the opposition will use this against you and for a good reason, as I have been now asked to stand for the other side who believe in Law and order…
I want action now to save lives.
Regards,

Christian Matheson (MP) City of Chester but for how long?